More Swedish Beers Love to go around from acrossair

I do like it when a plan comes together. There is more beer to go around thanks to the lovely folk at acrossair. Yes, that’s right folks, we have another sponsor to join our merry throng! Chetan and his team from acrossair will be on hand with a bunch of beer tokens for you all and some chat and banter about things mobile.

acrossair are creators of the Augmented Reality Browser on iPhone. The browser uses amazing 3D navigation which you can see as you spin round. There is local data from property companies and big name brands which is represented in an augmented reality view. If you hold it flat, it jumps to a Google maps view and when you spin around, so does the browser to make sure you know where everything is.

It’s free to download from iTunes and works on iPhone 3GS. And, if you have an iPhone 3GS, rather usefully, one of their services is to find your nearest Metro station in Barcelona. That could come in handy. Hint, the nearest one to Swedish Beers is Liceu. Make sure you have that one saved ;)

Oh, and if Augmented Reality is your thing, then you might want to check out the AR showcase that acrossair is participating in that my pals Dan and Christine are organising on Wednesday afternoon at Mobile World Congress in the Courtyard, just before Swedish Beers.

So good, Silverstreet had to sponsor it twice!

Yes, that’s right, the super team at Silverstreet had such a good time at Swedish Beers in Barcelona at Mobile World Congress last year that they’re sponsoring it again this year! And I’m thrilled to be welcoming them back to join us :)

So who are the folks at Silverstreet then and what do they do? Well they’re a specialist in messaging (SMS) offering global reach with MT termination options covering more than 700 networks worldwide (that’s going some). They have a focus on mission critical traffic (so making sure your message gets to the right place at the right time) and high volume (wholesale) clients. On top of this, they also maintain coverage for Premium Rate SMS in 32 countries and continue to expand their portfolio.

New to the Silverstreet suite of services is the introduction of its AirTime Transfer services which are geared towards Mobile Operators around the world who are interested in offering their subscribers a service where they can send airtime credits to their friends and family overseas.

Silverstreet has grown *a lot* since they were with us last year and now has local offices in Europe (where they started), the Middle East, Africa, Asia and Australia and most recently opened an office in the Philippines. With 10 years under their belt in the Mobile Industry, and members of the MEF, you’ll find the team a fun bunch and very happy to talk messaging and other mobile stuff until the cows come home. Much like the rest of us really!

Eric, Timo, Mitch and Mil will be there from Silverstreet so be sure to look out for them to say hello, chat about mobile stuff – messaging, airtime, PSMS or whatever. And if you ask nicely, I expect they’ll be more than happy to share their very generous amount of beer tokens with you.

Yes, it’s true. I can confirm that the lovely people at Monotype Imaging will also be sponsoring Swedish Beers goes to Barcelona!

So you’ll be able to enjoy a beer with Monotype Imaging, the company that combines design with technology to help the world communicate consistently beautifully everywhere. Come and meet their team, a bold bunch of characters who have worked with all the leading players in the mobile world simply making text work. And I quote Julie Strawson, (who you might know already from speaking at Heroes of the Mobile Screen and being a regular at the Women in Mobile Data Association meet-ups), she says, ‘We’re proud to be sponsoring this great event.’ Hurrah!

You might want to take a look at the Monotype Imaging website before you search them out for beer tokens on the night and also download and try out their lovely little font app FlipFont. I’ve downloaded it myself and use it on my Nokia N95 and very nice it is too.

Shaping up to be a good one folks!

I want, you want, we all want Swedish Beers… again!

Yes, it’s that time of year. It’s all about Barcelona and it’s as hectic as ever. But hey, I wouldn’t like it if it was any different.

We had such a great time last year – about 800 of you turned up throughout the night and you didn’t want to leave when it was closing time. We had folks there from as far afield as New Zealand and Brazil. We have global reach people! We also had people there from network operators, mobile marketing agencies, brands, analysts, journalists, entrepreneurs, developers of all flavours of mobile, aggregators, content creators, messaging specialists, media owners and lots more besides. You want it, you got it at Swedish Beers.

And by all accounts it was an epic night for some last year. People are still telling their ‘Swedish Beers’ tales, and not just from last year, from previous years to that too! I guess we’re doing something right then… 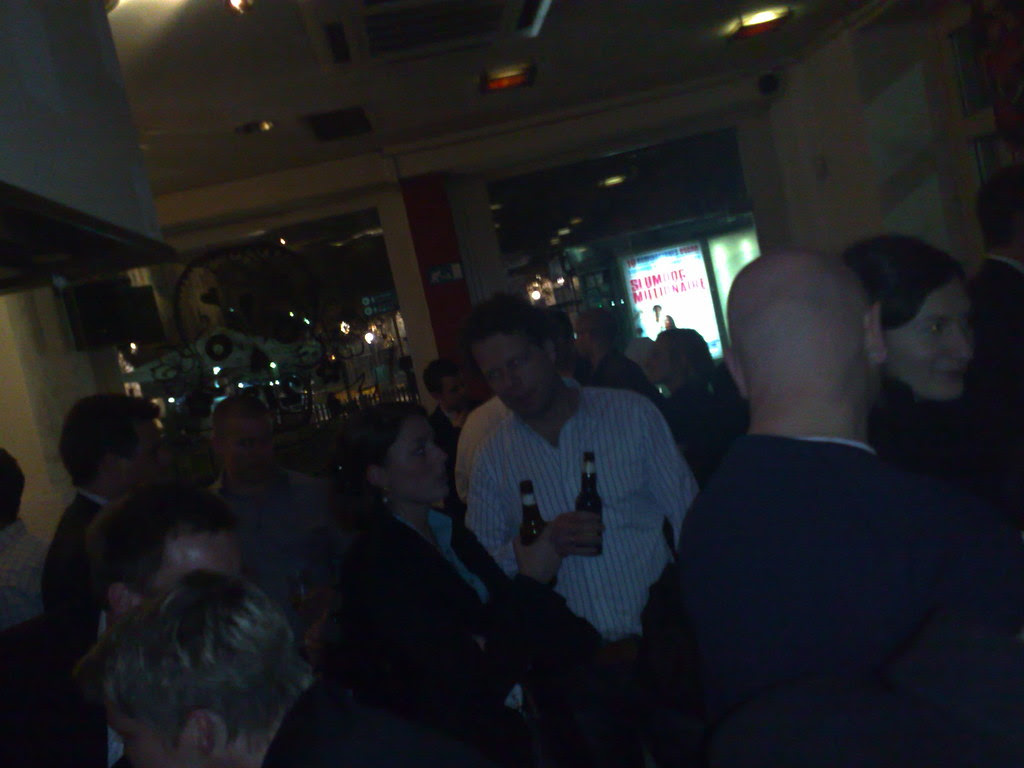 Anyway, we have the lovely Admob confirmed as our lead sponsor – third year running in Barcelona and I think the 5th time they’ve sponsored Swedish Beers since we started back in October 2001 in London.

We are still on the lookout for more sponsors though to help the party really go with a swing. Like last year, we can provide the atmosphere, warm bodies, great banter, friendly welcome and a good time if you can contribute towards the beer fund. Another £4,000 and I’d be *really* happy and not only would I be happy, but a lot of other people would be very happy too! Do get in touch if you’d like to make that happen :)

Our venue for the evening is Dostrece which is a two floor bar and restaurant – a ground floor and a chillout basement. Yes, that's right, a restaurant too! This means that they will be serving food from their normal menu until about 9pm so you'll get a chance to eat too if you want to. Prices are reasonable and it's a mix of Mexican, Spanish and Turkish flavours. @BCN_unlike reviews it here. We ate there last year and it was very tasty.

The venue holds about 300 or so folks at any one time so there’s plenty space for everyone. Dostrece is behind La Boqueria market and the nearest metro station is Liceu. Just walk up La Rambla, walk past La Boqueria and Teatro Grec, then take a left at Calle Carme (or Carrer del Carme) and Dostrece is at number 40 (Google map here). (They also have free wifi if you want to demo your latest iphone app.)

Doors will be opening at 6.30pm on Wednesday 17th February and we'll be open until late so there's plenty of time to drop by and enjoy the fun, meet interesting people and soak up the Swedish Beers vibe. There is no need to RSVP, but since there's a bar courtesy of our lovely sponsors, we will be distributing beer tokens on the night so you’ll have to look for the Swedish Beers crew and the lovely folks from Admob.

Like our previous events, this is a relaxed evening, no formalities, no presentations, no business cards thrust in your face as soon as you arrive. Just come with an open mind, be prepared to talk nonsense to strangers, enjoy a drink or five and have yourself a good time. Oh, and leave the ties at the door please.

It is likely to get a bit busy at times. But don't worry, people will be coming in and out all evening. That’s kind of the point as we know there’s always a lot going on. If it's very busy, there's no need to queue to get in. Just check out one of the other bars nearby and come back a little later when it's a bit less frantic.

We don't have a cloakroom so I don't recommend you bring your laptops with you - it's a liability in Barcelona I'm afraid. You won't need them anyway what with this new fangled thing called the mobile phone ;)

So just to recap:

What: Swedish Beers Mobile Networking
When: Wednesday 17th February 2010, 6.30pm until we run out of steam
Where: Dostrece, Calle Carme 40, 08001 Barcelona

And of course, it couldn't happen at all without the generous support of our lovely sponsors, the first of which is Admob.

*Admob* Founded in 2006 (on my birthday as it happens!), AdMob is AdMob is one of the world's largest mobile advertising networks, offering solutions for discovery, branding and monetization on the mobile web, serving more than a gazillion mobile banner and text ads per month.

Their growing client list includes a diverse range of Fortune 500 brands like Ford, Coca-Cola, EA, P&G, Land Rover, MTV Europe, Adidas, and Paramount Pictures, as well as publishers that are pushing the boundaries of the mobile web like AccuWeather, BluePulse, CBS Mobile, EA, Flirtomatic, Hollywood.com, Peperonity, and TinyTube. Admob are the primary monetization and acquisition partner for thousands of companies.

Russell (genuine old skool mobilist and blogger), Andy, Jonathan and I suspect a few more from their crew will be around to hand out beer tokens and generally chew the mobile fat.

Hope to have more sponsors to announce soon as well! Get in touch if you’re interested